The 2021 Hospice Regattas National Championship was raced at the College of Charleston's J. Stewart Walker Complex in J22s. This event was open to winners of their regional events held in either 2019 or 2020. The event opened on Thursday with practice sailing followed by a reception at the Hobcaw Yacht Club. Most of the teams took advantage of the practice day and got on the water to work on their boat handling. The most impressive part of the event was the staff at the CofC center. Ned and Ansel (and their other helpers) were just amazing. They did all the maintenance and upkeep on the fleet. They kept all the boats going by repairing them on and off the water. If you haven't seen the entrance to the complex it has a fairly small opening and Ansel was able to tow three boats through the opening in 2-3 knots of current, bring them all the way to the dock, do a full 180 degree turn and dock them. Their level of skill and professionalism is truly phenomenal. The leadership at the center is lucky to have them on staff. The social activities were top notch; Hobcaw and the other event organizers provided superb food and what seemed like an endless supply of beer.

The forecast for Friday was for big wind; the PRO was discussing options to disallow spinnakers for the day. While sitting in the protected sailing center it seemed tame but looking out at the harbor told a different story as the wind was reportedly blowing 20+. They held the competitors at the dock for a hour or so to let the breeze calm down. It did finally calm down into the 12-18 knot range which was just enough to get three good races in. With the full moon the current was quite challenging and some estimates had it at 2-3 knots. The key to the day was good boat handling and playing the current. As you can imagine the lake sailors had to learn fast but both LNYC teams were able to do well and each won a race. It was clear from the first start both teams from LNYC were in it to win it. Steve set up a little early and was forced over the line by Pete on the first start of the day. Steve recovered and secured a 2nd place in the first race. In race two Steve and Pete pulled away from the fleet and had a bit of a match race for three legs; finishing 1st and 2nd. At the end of the day Steve Shaw was leading the regatta with a 2, 2, 1 score line. Pete Marriot was in fourth with scores of 5, 1, 7.

Saturday the wind clocked just a little more East so the course was moved further out into the harbor. Everything that was learned about the tide and currents the previous day was of no use. The starting line was placed right where two currents converged which created a unique and challenging starting line. With the wind blowing 10-15 knots the race committee was able to get 3 more races in. Pete had another solid day with a score line of 4, 1, 5. Moving up one spot Pete ended the day tied for 3rd overall. Steve and team stayed towards the front of the fleet with identical scores as the first day at 2, 2, 1. What is most impressive is that Steve was able to pull off a second even while trying to catch crabs for lunch (caught a crab pot). Steve ended the second day in 1st overall with 8 points (discarding a 2nd).

Sunday the third and final day did not have a promising forecast. They were calling for the same strong current but 4-8 knots of breeze. At times it seemed that boats were sailing but not moving. It was frustrating for all the competitors with the lighter breeze. JD Rosser the PRO was able to get one race off and wisely called it for the day and sent all the competitors in. Pete didn't have his best race but was able to throw it out. Steve Shaw pulled off another 2nd to cap a great regatta. Steve is the first North Carolina sailor to win this event. He ended the event with a total score of 10 followed by Ned Johnston (previous winner, Maine) at 17, and Jim Greenfield (Connecticut) at 18 points. 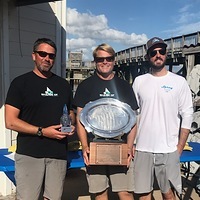 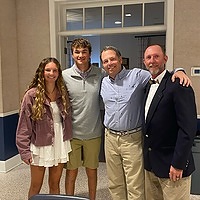